Save Our Schools March: United, we stood for all children’s right to a high-quality public education 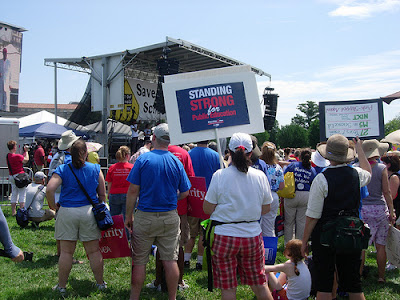 The planners brought in serious academic prophets of educational equity – NYU’s education sociologist, Pedro Noguera; Deborah Meier, New York small-schools founder and education guru;  Linda Darling-Hammond, the Stanford Professor who almost became Secretary of Education until pushed aside by a campaign by corporate reformers; Angela Valenzuela, professor of cultural studies at the University of Texas; Jonathan Kozol, the writer of a whole shelf of books about inequity and injustice for children and in public schools – beginning with Death at an Early Age in the 1960s; and Diane Ravitch, NYU education historian who donated the Moynihan Prize money she was recently awarded by the American Academy of Political and Social Science to help pay for the rally.

The event got press coverage, a lot of it devoted to celebrities like actor Matt Damon, who contributed financially to the rally and the video clip sent from Jon Stewart.
Speakers decried corporate-style school reform that has culminated in Bush’s No Child Left Behind Act and Obama’s Race to the Top.  They affirmed the importance of a strong system of public schools that provides an opportunity to learn for all children with a variety of needs, not a race that creates a few winners and the rest who lose out.
And they spoke up for school teachers and against those who claim teachers need merit pay incentives to do their jobs well.  Again and again speakers pointed out that the dedication of teachers is not motivated by financial gain.  After Ravitch’s speech, teachers chanted, “Thank you!” “Thank you!” “Thank you!”
Delegations from places where public education has been under attack were particularly visible – Chicago, Wisconsin, and New Orleans.  Ohioans wore buttons decrying Senate Bill 5, the anti-collective bargaining law that will go on the ballot for possible repeal in November.   While unionized teachers were present in matched T-shirts from many places, the rally was a grass roots affair originally growing from several bloggers who are Nationally Board Certified teachers.
In perhaps the day’s most moving speech, a school superintendent from Texas declared his unwavering commitment to educating all children. I paraphrase here as closely as possible what he said:
“The schools in my district are failing schools.  You want to know why?  Eighty percent of my children do not speak English when they come to us and they can’t pass the tests after only one year in our schools.  I wear my scarlet letter proudly, because it means that we serve the children who come to us; we do not push those children out of our schools.  It is our job to welcome them and to teach them.  We seek to be the Good Samaritan and not pass by on the other side of the road.  In these terrible times of attack on educators and public schools, I take heart, knowing that our children’s lives will be touched by what we do for them while they are with us.”
at 12:49 PM

Thank you for reading our blog and for your comment!